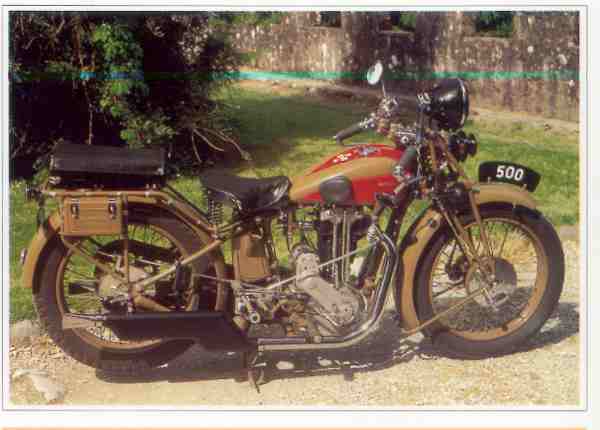 Last of a great line

It isn't sufficient to have a reputation for making the most reliable bikes Â– a sporty image is also essential for a successful manufacturer. Thus in 1923, Motosacoche marketed its first ohv motorcycle, the V-twin 2C 10 Grand Sport. Two years later, it launched an ohv 250 single, which had very limited sales.

In 1928, the Swiss company moved into mass production and introduced a range of 250 to 500cc machines, with totally new single-cylinder engines that owed nothing to the marque's famed F-head units. The crankshaft was more rigid, the cylinder head had twin exhaust ports and the pushrod and rocker overhead-valve gear was totally enclosed.

The three models shared the same cycle part, a modern interrupted double-cradle with a saddle tank and a Webb-type girder fork with a central spring. These 250, 350 and 500cc models respectively developed 10, 14 and 20 hp and achieved speeds of 68, 75 and 84 mph. In 1930, Motosacoche celebrated 25 years of production by launching its Jubilee 500 models (Touring Type 418 with side-valves, instead of the F-head layout of the previous 316 and 416 Touring), Grand Sport (ohv but still catalogued as Type 417) and an over-the-counter racer (ohv, developing 31 hp at 6000 rpm). The Sturmey-Archer gearbox was supplanted by a Hurth unit with an ingenious method of adjusting the chain tension by rotating the box in me frame. The magneto ignition was replaced by a dynamo and battery system and wet-sump lubrication with a submerged pump was adopted.

The ultimate version of the ohv 500 launched in 1928, this 1930 500 Sport was replaced in the same year by the totally new Jubilee Grand Sport.