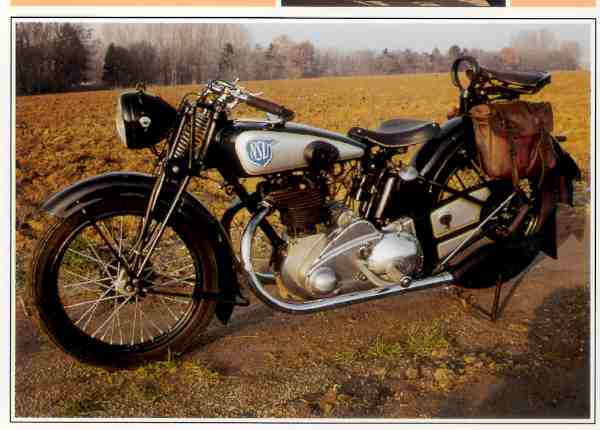 German through and through

The little world of the motorcycle created its own European community long before the politicians had the same idea. So it was that NSU, a pioneer of the German industry, achieved fame on the racing circuits in 1930 with a single overhead camshaft engine developed by Walter Moore, the English engineer who had just created the famous Inter models for Norton Â– and their German successors bore a strong family resemblance. In 1933, NSU profited from the experience gained from competition by introducing the OSL 250, 350, 500 and 600cc which, apart from their overhead-valve heads, were replicas of the overhead cam racers.

German-built quality is legendary: all the components of the OSL were designed for long service without problems. The chain was protected by chaincases, the crankshaft turned in three bearings and the overhead valves were enclosed in an aluminum casing atop the twin-port cast-iron head.

Only the massive hairpin valve springs were exposed to the air Â– and these were rapidly replaced by coil springs with an ingenious means of taking up the valve clearances by eccentrics accessible from the exterior. To emphasize the relationship with the racing NSU "Bullus", the pushrods were enclosed in a tube designed to look like a racing overhead camshaft housing. The touring aspect resided in the enclosed chaincase lubricated by oil mist from the engine.

Typical German motorcycles of the 1930s, the OSL series was particularly well made and remained in production until shortly after World War II.