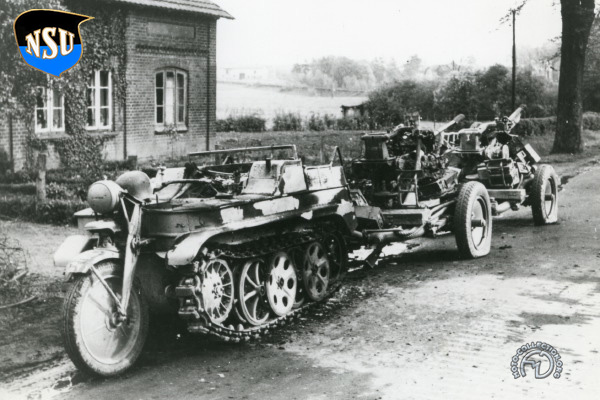 When the German army wanted a light, offroad, load-carrying vehicle that could be used by soldiers accustomed to handling motorcycles, it laid down a strict specification. BMW and ZĂĽndapp built motorcycle combinations with powered sidecar wheels, while NSU employed a more daringly original concept.

The Kettenkraftfahrrad Â– or "Kettenkrad" Â– was the smallest halftrack vehicle built. Because NSU didn't make a suitable power unit, the 1.5 liter four-cylinder Opel Olympia engine, built by the German arm of General Motors, was used (NSU had ceased car production in 1932 and did not resume it until 1958). The three-speed transmission of the Kettenkrad was fitted with a two-speed transfer box, making six forward speeds in all.

The front wheel was really only there for its psychological effect, for it had no effect on the steering. Turning the handlebars applied brakes to the caterpillar track on the inside of the turn, making the Kettenkrad effectively skid around corners. This gave it a very useful turning circle of 10 feet. It was capable of carrying two passengers seated with their backs to the rider and hauling heavy loads down tracks little more than 40 inches wide and across rivers 20 inches deep. The Kettenkrad was widely used by the Germans on the Eastern and Mediterranean fronts; it first went into action during the German landings in Crete during 1941. Total production was 7813 between 1941 and 1948.

The NSU Kettenkrad is difficult to classify, for it has to be the heaviest "motorcycle" ever made, yet it isn't quite a tank; what's clear is its sheer versatility.