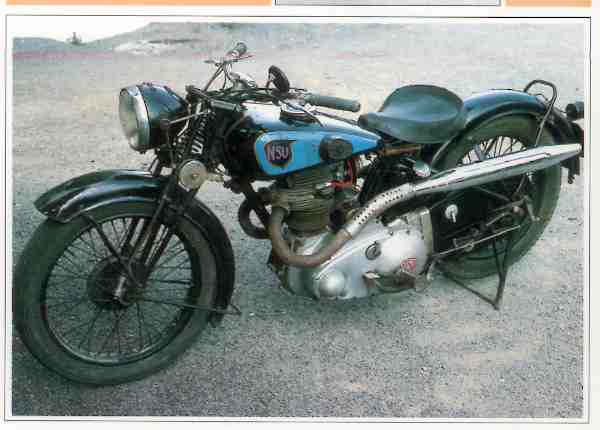 British style made in Germany

Walter William Moore, designer of the Norton International, joined NSU in 1929 and created a virtually identical engine for his new employer. In 1930, this racing 500, ridden by Bullus, rapidly made its mark on the international scene, winning Â– among others Â– the Grands Prix of Germany and Austria and the prestigious GP of the Nations at Monza. With the 500 SS, NSU had a formidable basis from which to derive its client-competition models.

It took five years for NSU to launch a sports model destined for a wider public. This machine, initially known as the OS, then OSL (sport luxe), abandoned the overhead-cam valve gear in favor of conventional overhead-valves. Operated by pushrods enclosed in a single vertical tube, the valve gear was reminiscent of the drive shaft of an overhead-cam racing engine.

If the valve gear was partially exposed on the latter series, it was completely enclosed on the Second Series OSL, which also gained a fourth speed in its gearbox. A light-alloy cylinder head was available as an option. In a country where shaft drive was commonplace, NSU still hung on to its chain drive, which was completely enclosed. Production of the 500 OSL totaled 7997 units between 1935 and 1939. The engine did not reappear after WWII until 1951. It was fitted in a completely new frame, as the NSU Konsul II (the Konsul I had been a 350), with suspension at both ends. 5366 examples were built, ending in 1954.

The twin-port 500 engine of the OSL was optionally available with high-level exhausts, and was originally fitted with fishtails.