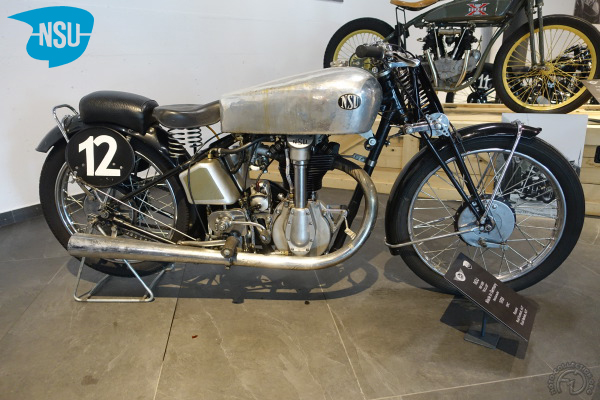 In 1929, NSU, Germany's biggest and oldest motorcycle manufacturer, had lo t its sporty reputation and was seeking a new engine to reestablish its image.

British motorcycles were supreme in racing and the British engineers the most highly regarded. NSU approached Walter Moore, who had just created the first 500cc "cammy" Norton engine, with which Alec Bennett had won the 1927 Senior Tourist Trophy.

In 1928, the Norton CS1 ("Camshaft Senior") design was marketed in 350cc form for privateers as the CJ1 ("Camshaft Junior"). But the Sunbeam victories in the 1928 and 1929 TTs created a tense situation between Norton and Moore. Appointed chief engineer of NSU in 1930, Moore arrived at Neckarsulm with an improved version of his CS1 and a promising British rider Â– Tommy Bullus - who had made his name racing New Hudsons and Raleighs. In 1930, Bullus was NSU's top works rider, and, backed by Germans Toni Ulmen and Paul Ruttchen, he won virtually every race in which he competed Â– particularly hill climbs, where he often recorded faster times than the racing cars. In contrast to the single-port NSU works machine, which developed 30 hp running on alcohol, the sports model 500 SS followed the fashion with double downpipes (a single exhaust was optional). The works version also existed in 600cc form, and that ohc "Bullus" was the basis for the ohv OS and OSL versions, unveiled in 1932 in 500cc form then, in 1934, as a 350.

The biggest successes for Tom Bullus's NSU in 1930 were the GP des Nations at Monza and the hillclimbs at Klausen (Switzerland), Fribourg (Germany) and Gaisberg-Salzburg (Austria).