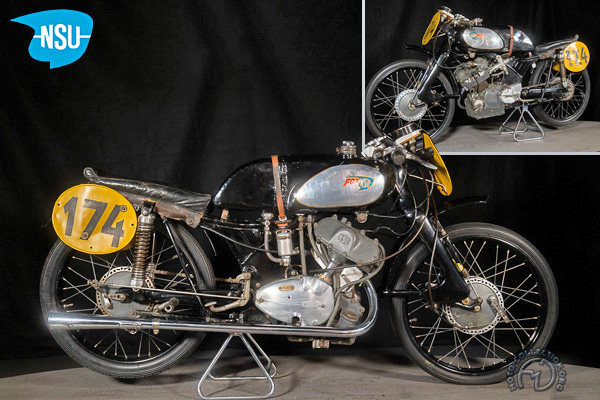 The beginning of absolute domination

Starting at the Top

The German GP victory was the beginning of a period of absolute domination for the 125 NSU. Haas, a young rider who was totally unknown at the time Ā– even in his own country Ā– took the world title in 1953 and 1954, beating the Italian MV Agustas and Mondials. In its original version, his twin-cam single developed 12 hp at the start of the 1952 season but hit 14 hp by the time the season ended. Fourteen hp equalled nearly 95 mph on the track.

Apart from its ignition system, the Rennfox managed to stay pretty faithful to the specification of the production 125 Fox. It retained the same crankcase as well as the pressed steel backbone frame, the leading link front suspension and Ā– in the early days Ā– a swinging fork rear suspension with a single damper concealed in the spine of the frame. That layout was quickly relegated to production models, while the racers gained conventional twin side-mounted shock absorbers. From 1953 to 1954, the engine was lightened and improved. With a single-overhead-cam and six speeds instead of four, it developed 16.8 hp at more than 10,000 rpm and showcased a top speed of 105 mph.

At the cost of a huge technical effort, NSU obliterated its European rivals and joined the exclusive ranks of the marques that have won a Grand Prix their first time out.