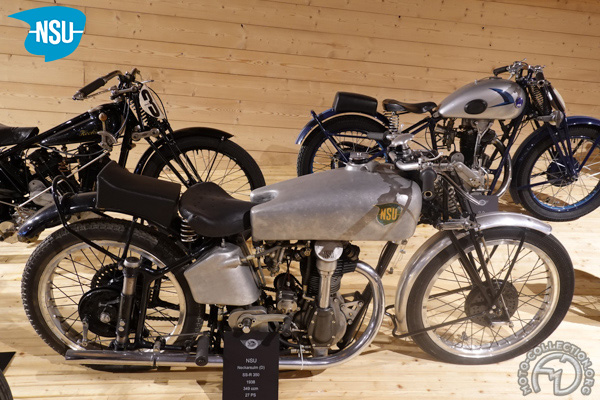 Before the appearance of the new NSU 350 supercharged twin, the famed Neckarsulm factory successfully raced single-overhead-cam singles between 1930 and 1938.

The first of these, designed by Briton William Walter Moore, recruited from Norton in 1929, were similar to the Norton CS1 he had created in 1927. Available in 500 and 600cc capacities, the new NSUs soon became known as "Bullus" after the British rider Tom Bullus, signed by NSU at the same time as Moore.

Bullus was the most successful rider of the NSU works team, which also included Giggenbach, RĂĽttchen and Ulmen in 1930, then the Viennese Rudi Runtsch and the German Hans Soenius in 1931. In 1933, NSU developed a 350 version of the Bullus, which was only available to works riders for its first two seasons and was then sold as a "straight-from-the-crate" racer in 1935. That year, the most promising NSU works riders were Oskar Steinbach (350 and 500cc German Champion in 1935) and Heiner Fleischmann, who took the German national 350 title in 1936 and 1937 and continued to race this bike between 1947 and 1949, when NSU returned to racing, with its 350cc (and subsequently 500cc) supercharged twins. Fleischmann's old 350 racer was recently acquired by collector Reinhardt Scholz in exchange for a military NSU Kettenkrad, and the Hockenheim museum displays an ex-Fleischmann SSR 500.

Formerly ridden by Heiner Fleischmann, twice Champion of Germany, this NSU 350 SSR has an impressive history.