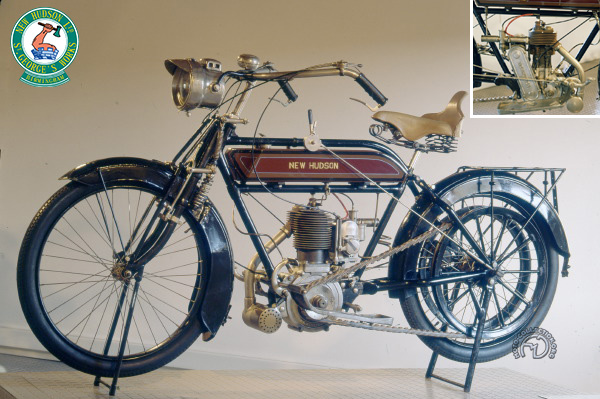 At the heart of the industry

Like so many motorcycle manufacturers, New Hudson began by making pedal cycles in the last years of the 19th century, and when the appearance of suitable petrol engines caused a huge increase in demand, they strengthened the frame of a bicycle to take a Belgian Minerva engine. This first powered model went on the market in 1902.

From Minerva to JAP

Based in Birmingham, at the heart of the British motorcycle industry, New Hudson abandoned the Minerva engine in 1908. Later came London-made JAP engines, and the first New Hudson-JAP Â– designed by J. E. Greenwood and modem in appearance, with a Bosch magneto mounted high behind the cylinder Â– appeared at the 1911 Olympia Show in London.

Following a trend that flourished in Britain in 1910 and 1911, the New Hudson was equipped with an Armstrong three-speed epicyclic hub gear, an ingenious system that could prove frustratingly fragile, the lack of room inside the hub compelling the maker to use undersized gears. New Hudson entered the Senior Tourist Trophy in 1914 but was compelled to retire with mechanical problems. However, New Hudson achieved success in the famous race in the 1920s, when Jimmy Guthrie finished second in the 1927 Senior TT on a 500 developed by Bert Le Vack. New Hudson was subsequently absorbed by the BSA group.

Elegantly simple, the New Hudson had a three-speed rear hub operated by a substantial lever on the top tube.