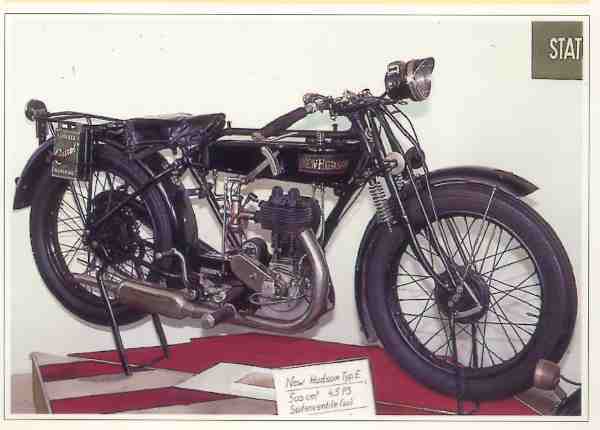 At the beginning of this century, Birmingham-based New Hudson progressed from building bicycles to motorbikes, initially using imported power units. At first, Belgian Minervas were used, then a range of Tottenham-built JAP engines. New Hudson began making its own power units after WWI Â– the smallest was a 211cc two-stroke. The marque's four-stroke side-valve singles were the most popular.

Using the same crankcase, as well as many common components, these singles were built in three displacements Â– 346, 498 and 569cc. The best-seller was the 498c Type E, which acquired an excellent reputation thanks to its great reliability and competitive price.

Its tank was divided into two compartments. The front one contained the oil, which was circulated to the engine by a Pilgrim pump on the timing chest. Even though the side-valve New Hudsons were primarily everyday touring machines, the marque also participated in competition. In 1922 and 1923, works versions of the 500cc Type E were entered in the Isle of Man Tourist Trophy. These works racers began by trading their cast-iron pistons for aluminum components, then acquired more powerful brakes, as well as overhead-valves, in 1924. Engine preparation was entrusted to the expert hands of rider-tuner Bert Le Vack, who in 1927 became the first 500cc rider to lap the banked oval Brooklands track Â– located southwest of London Â– at over 100 mph.

This 500cc model dates from 1924 and bas primary and secondary transmission by chain and powerful drum brake Â– a long-overdue improvement.