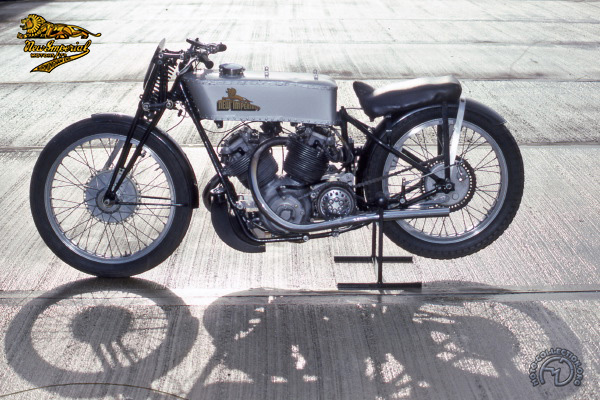 Failure on the last lap

The year 1936 was a time when racing was in flux: some marques withdrew from competition altogether, others kept to the proven solution of the single cylinder, and the rest invested heavily in advanced technology, sturdy superchargers, and multicylinders.

In 1936, twenty 500cc bikes started in the world-renowned Senior Tourist Trophy on the Isle of Man. Among them were two air-cooled supercharged AJS four-cylinders (which retired on the sixth lap), three Vincent HRD singles which had been stripped of their blowers shortly before the race and consequently failed to distinguish themselves, a DKW twin-cylinder two-stroke, and just two four-stroke V-twins- of astoundingly similar design. They were the Husqvarna of Sundqvist and this outstanding New Imperial ridden by Ginger Wood.

It was obviously not the year for the innovators, for only ten motorcycles finished the race, which was dominated by two conventional singles, the Norton of Alec Guthrie and the Velocene of Stanley Woods, closely followed by this New Imperial, eliminated by a broken chain on the last lap. This 500, on which work had started in 1934, consisted of two cylinders from the works 250 (which had won four TT victories for New Imperial) on a common crankcase. Unusually for a New Imp, a separate gearbox was used. The crankshaft ran in five bearings, permitting an engine speed of 8000 rpm, which gave the 500 a top speed of 106 mph.

The sole New Imperial Senior TT machine carries its oil in the separate tank ahead of the crankcase.