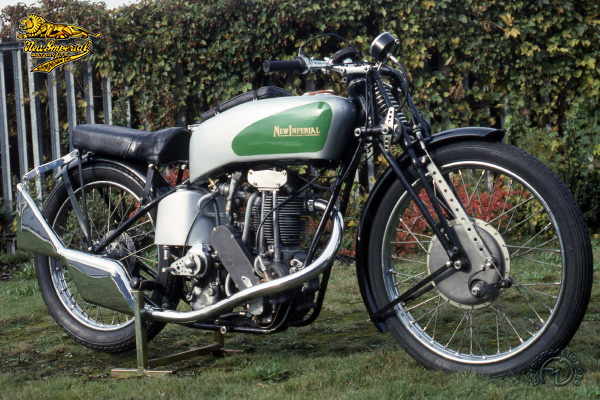 The racing New Imperials were beautifully made machines with double-cradle frames and extremely lightweight engines. The first to make intensive use of magnesium, they were outstanding performers at the two key venues of British motorcycle sport Â– the 38 mile Isle of Man TT mountain circuit and the 3-mile banked track at Brooklands.

The "New Imp" won its first TT in 1921 with Doug Prentice riding a 250 JAP. In 1924, the Twemlow brothers scored a TT double in the Lightweight (250) and Junior (350) races Â– still with JAP engines Â– and Eddie Twemlow won the Lightweight again in 1925. New Imperial then abandoned JAP engines to make its own overhead-valve power units. Still competitive in 1930, the 250 won the French Grand Prix for Ted Mellors.

First Past the "Ton"

During the next few years, Mellors, Gleave and Davenport won many international victories on their 250 and 350, including the Isle of Man TT, Assen and the Belgian, Ulster and French Grands Prix (in the 250 race at Reims with Davenport in 1932). Later on, Bob Foster gave the works its last major success with victory in the 1936 Lightweight TT with the new unit-construction engine. The other great prestige-pulling achievement was breaking the record at Brooklands. There was fierce rivalry between New Imperial and Excelsior to be first through the 100 mph barrier with a 250 on the British speed circuit. Excelsior had already pushed the record to 93 mph when Les Archer, riding a 250 with a head fairing and running on alcohol fuel, lapped the famed banked oval at 100.4 mph.

Due to its upper-crust urban location, Brooklands track demanded the fitting of the celebrated "Brooklands Can" muffler.