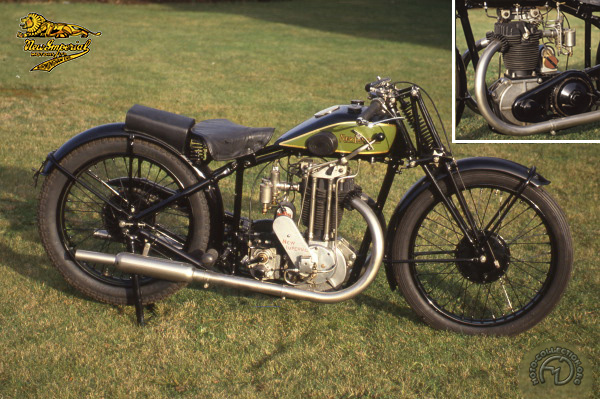 New Imperial, which had just set 13 world records in the 250 class at Brooklands in October 1928, confidently displayed nine models, including a new overhead-valve four-stroke, at the London Motor Cycle Show the following month.

The major innovation on the overhead-valve 250, 350 and 500 models was the twin exhaust system. It was publicized as offering greater performance combined with less noise.

Making Two out of One

The side-valve 350 and 500 were fitted with expansion chambers in front of the cylinder. It transformed their single exhaust pipe into a twin tube system, similar to that of the ohv models. Such luxury cost $70 for the side-valve Type 7 Semi-Sport 500 and $78 for the Type 7B Super-Sport: most popular was the new 350 Super Racer 10A, priced at $98. The trendy "must haves" were pressure lubrication and dry-sump lubrication, double-cradle frames, center stand and twist-grip controls. Manufacturers had to follow the trends in order to survive. So the "New Imp" adopted a saddle tank in 1928, then in 1929, came with twin exhausts and an enclosed valve gear, while the company fitted a dry-sump lubrication by joining an oil return to the external oil pump. In 1930, the marque introduced the Blue Prince, with standardized 19 inch wheels and a double-cradle frame (exclusively fitted to TT models in 1929). It also offered genuine dry-sump lubrication with a pump built into the power unit. In 1934, New Imperial introduced a unit-constructed engine. Swing arm rear suspension was offered in 1937.

This finely-restored Super Sport Model 7B is stripped for action; less sporty riders could specify lighting equipment and a speedometer, but it all added weight!