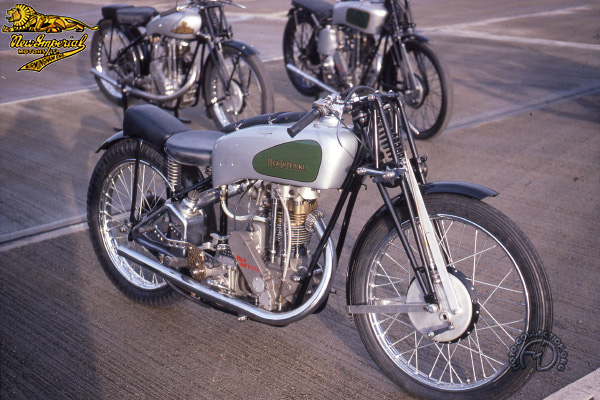 Though New Imps had raced in the Isle of Man in 1913, the company's winning streak began in 1921 with victory in the 250cc class, then ran concurrently with the Junior TT.

Until 1926, New Imperial used JAP engines; then it began making its own engines Â– classic ohv singles. The first successes came when Ted Mellors's 250 won the 1931 Belgian GP and 1933 Dutch GP. Also in 1933, Charlie Dodson won the Ulster GP, while the year before, Les Archer's 250 was the first quarter-liter bike to lap Brooklands at over 100 mph (his actual speed was 100.41 mph). In 1934, the works New Imperial riders were given special 250 racers with a magnesium crankcase, bronze cylinder head and a cast-iron cylinder with shrunk-on aluminum fins retained by six studs. This ohv 250 ran on a 50/50 mixture of gasoline and benzol. Mellors left New Imperial, and 1934 passed without a win Â– just a second place for Bob Foster in the Manx GP. Foster's record-breaking win in the 1936 Lightweight TT with the legendary unit-construction "Flying Pig Trough" was the last victory for a British bike in the Lightweight TT.

This 250 did not achieve the success it merited. Noteworthy details are the aluminum oil tank by the rear wheel and the long front brake stay.