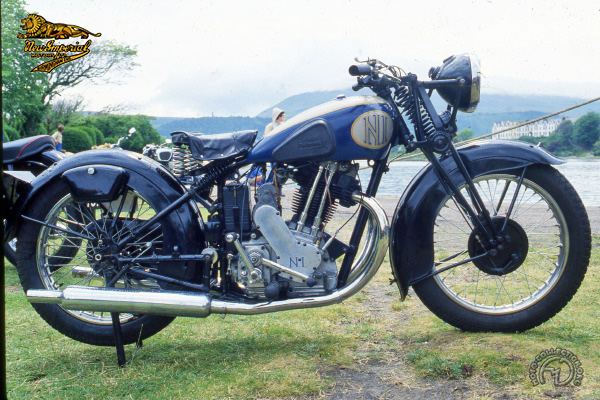 Way ahead of its time

Few prewar British motorbikes had unit-constructed engine/gearboxes. If swinging-fork rear suspension was also included in the specification Â– as on the 1937 New Imperial 500 Â– the bike was really something out of the ordinary.

Well-known for the outstanding sportingÂ· record of its 250 and 350cc singles, the "New Imp" came from Birmingham Â– center of the British motorcycle industry Â– where the company had been founded in 1900. The marque was a technological trend-setter Â– it used double-overhead cams in 1922, and four-speed transmissions and dry-sump lubrication as early as 1929.

In the 1936 Tourist Trophy, there was a new bike for works rider Bob Foster. Derived from the 250cc production model, the racer had a unit-constructed engine/gearbox, wet-sump lubrication, and leaked oil so badly that "Fearless Foster" nicknamed it the "Flying Pig Trough." It won the Lightweight TT at record speed, covering the 264 miles of the race at an average of 74.25 mph and crossing the finish line without a drop of oil left in the sump! This ultra-rare 500 was built on the same lines as the 250cc and 350cc New Imps, and was the firm's swan song. The doors closed in 1938. A rescue plan by Jack Sangster of Triumph supported a brief comeback, but the outbreak of World War II

The rear suspension of the New Imperial500 acted on a single helical spring with a friction damper whose settings could be altered while the bike was in motion by a big knob under the saddle.