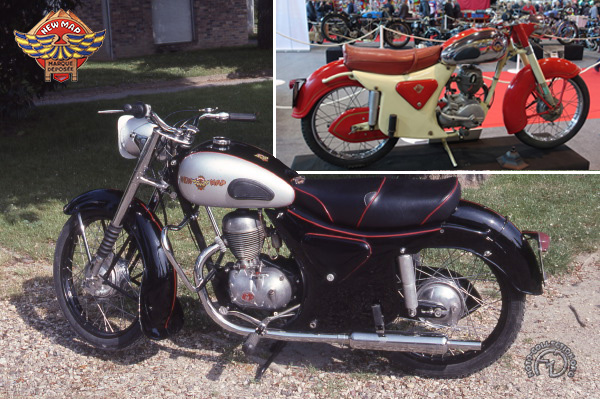 Putting Lyon on the map

The curiously-named New-Map company, founded by Paul Martin, based in Lyon, built its own frames, but used a wide variety of English, Swiss and French power units.

After WWII, New-Map Â– which was also an importer of British Douglas flat-twins Â– resumed the policy of in-house frames and proprietary engines. The marque made its own tanks, tool-boxes and other pressed-steel components, including the girder fork elements of its lively rigid-frame models. Going up the range, there was the "16000" series, with New-Map's patent design rubber-damped pressed-steel swing arm rear suspension. The engines were either AMC four-strokes from Clermont-Ferrand or twoÂ· strokes by Ydral of Suresnes.

In 1954, a proper hydraulically-damped rear suspension appeared, still with a pressed-steeI fork. As on the "16000,Â” the front forks were German Tiger telescopics. The new series was called "Leader," and at the 1955 Paris Motorcycle Show, nine models were displayed, four of them with Ydral 125 or 175cc engines, four with 125 or 175cc AMC power units and a single model with a German 175cc Sachs two-stroke. In addition, there was the "Super-Leader," powered by an Opti twin designed by the famed German engineer KĂĽchen. This four-stroke with a chain-driven single overhead-camshaft was also used in Swiss Motosacoche and German Tornax bikes. However, the Super-Leader sadly never passed the prototype stage.