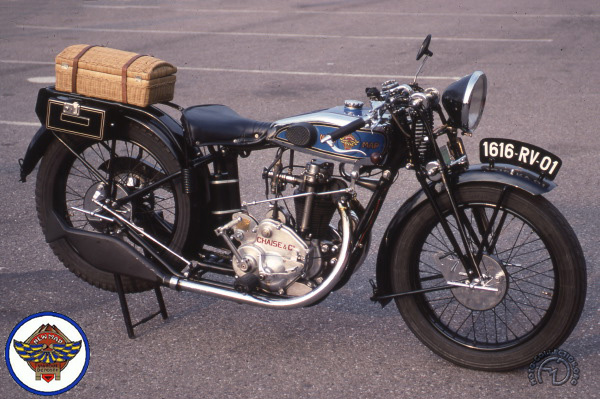 The Blue Angel from Lyon

France's New Map, made in Lyon, was an outstanding example of the breed of constructor-assemblers whose products formed a serious challenge to the major marques. Founded at the beginning of the Twenties, New Map built bikes in virtually every capacity class and used just about every brand of proprietary engine on the market. This particular machine is fitted with the compact unit-construction Chaise single (built in Paris from 1928 by Omnium Métallurgique & Industriel), but New Map also employed MAG, JAP, ZĂĽrcher, AMC, Sachs, and Ydral engines.

Despite this complex lineup, New Map established a solid reputation, due in no small measure to the superb finish of its machines, which were always equipped with the very latest accessories and up-to-date technology. That was the great advantage of being an assembler, whose production methods were necessarily more flexible than those of a constructor, and could instantaneously adopt the latest developments from current production.

In Lyon they called this bike L'Ange Bleu ("Blue Angel") after the 1930 film starring Marlene Dietrich. The striking metallic blue New Map gas tank contrasted strikingly with the habitual black finish of its rivals. Priced at under 6000 francs, the 350 New Map cost less than most of its competitors.

Like so many other French marques, New Map survived the war only to find the economic constraints of the post-Armistice world increasingly difficult to cope with production.