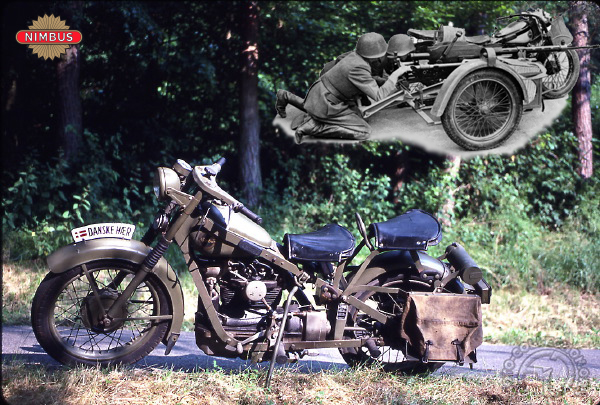 A rustic mount for the Danish Army

Surely unique in the long history of the motorcycle, the Danish firm Nimbus concentrated its entire production, from 1919 to 1960, on a single model: a 750cc in-line four-cylinder.

Until 1934, the marque used an F-head engine nestled beneath a large-section tube that doubled as frame and fuel tank. The new Nimbus launched that year continued to the end of production 26 years later with only detail modifications. This time, the engine had a single overhead camshaft, though the valve springs were still exposed to the air. This unstressed yet unburstable power unit breathed through a single carburetor. The three-speed gearbox was bolted at the rear of an already long power unit.

The first version, remarkably ahead of its time, had swing-arm rear suspension. The second generation Nimbus, on the other hand, had a rigid frame Ā– a curious double cradle set-up made from strip iron. A year before BMW, the Nimbus was the first production motorcycle fitted with a telescopic front fork of a recognizable pattern. It was principally intended for the public sector and the military version only differed in detail: a side stand, a toolbox at the rear, pannier bags and a blackout mask on the rear lamp identical to that used on the BMW Type Russia.