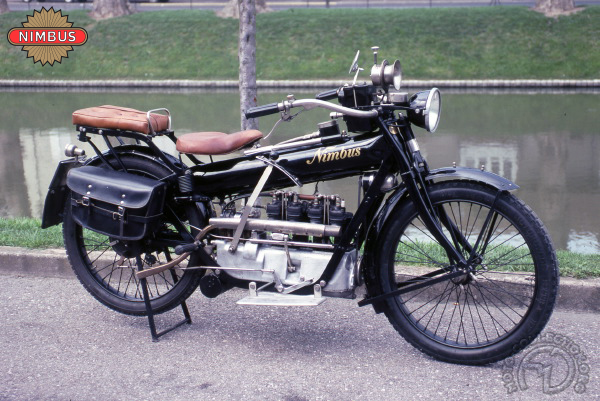 Inspired by the Belgian FN, the Danish Nimbus followed the same layout, with a four-cylinder power unit set longitudinally in the frame, with a shaft driving the rear wheels. Particularly advanced for its day Â– with trailing link front suspension and rear springing in an era of rigid frames Â– the "Stovepipe" Nimbus was produced in relatively large numbers. Up to 1928, a total of 1252 "Stovepipes" were built Â– a record in an age when most production was small-scale.

The "Stovepipe" took its nickname from its large-diameter top tube, which doubled as the fuel tank, a bright idea which was later copied by other makers like the Swiss Fritz Egli. Attached to the tube was a double cradle frame in pressed steel to which the engine was bolted, making the bike terrifically rigid.

Modern and original in concept, the Nimbus was also strongly built and an excellent performer, achieving a degree of success in endurance trials even though it had not been designed as a sports bike. In 1921, a Nimbus won the 800-mile Paris-Copenhagen race. In 1922, a sister Nimbus arrived four hours ahead of the second-place bike in the Odense-Berlin-Odense competition, maxing out at nearly 70mph and achieving remarkable gas mileage (60 mpg!).

Founded in 1919 by P.A. Fisker, Nimbus built motorbikes up to 1960; nowadays, under the name "Nilfisk, " the company makes electrical household appliances.