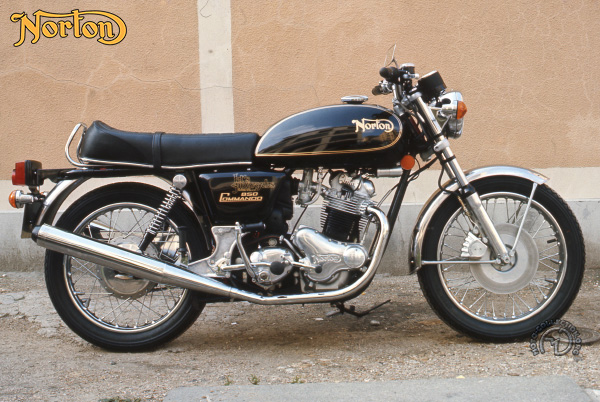 When Norton was forced to bring out a new line in 1967 to keep up with the competition, the gathering financial problems of the British manufacturer forced it to set aside its projects for new power units and use the existing engine of the 750cc Atlas parallel-twin model.

This design was long outdated and suffered from terrible vibration. To solve the problem, Norton's engineers came up with the ingenious idea of combining engine, transmission, rear fork and wheel as a separate subassembly on sturdy mountings. The first Commando with an Isolastic frame had been born.

The Commando enjoyed a well-earned success through its outstanding road- holding and the torquey responsiveness of its engine, but Japanese competition was increasing and evolution was necessary. Development Engineer R.V. Trigg - already responsible for the Isolastic frame - developed a new 7- gallon tank within three months of the crucial London Show, creating the new Norton Interstate. Norton had been the sole British builder to show a profit in 1972 and, in the same year, the company unveiled an 828cc evolution version of the Commando as well as a 65 hp "Combat" version. The Commando

Interstate remained in production until 1978. A modified version appeared in 1975 with an electric starter and the gear selector on the left, Japanese- style.

Shown here in its 1974 Interstate version, the Norton Commando was the last survivor of an era when British bikes were kings of the road.Â”