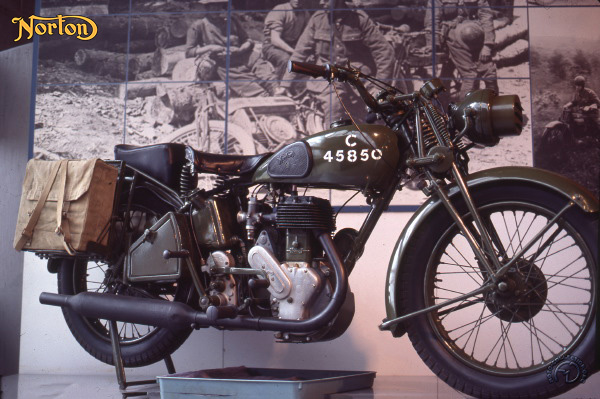 Lots of bikes for the war

Four models - destined chiefly for the British and Canadian Armies. The model shown, the 16H, was a simple and robust 500cc sidevalve single. It was used both as a solo mount and with a sidecar.

Norton developed a special 633cc version of this design which was used in conjunction with a sidecar. It took the name of, and had the same displacement as the first Norton with an own-make engine, the 1907 Big Four, so-called because it was a 4 hp model. The 3hp 500 appeared soon after, followed during the 1910s by the Model-16 in versions which included Colonial and BrooklandsSpecial models. Then, in 1920, came the first 16H ("H" was said to stand for "Home," because the 16H was destined for the

domestic market). It was a designation which didn't disappear from the catalog until 1955.

While it underwent many changes, the 16H kept the same engine dimensions (73mm bore, l00mm stroke) throughout its long life. Reconditioned army-surplus 16H Nortons were available long after the end of hostilities: Garreau, the French importer, was still selling them in 1975! The 16H was most commonly used as a dispatch rider's bike, and was sometimes used to transport carrier pigeons. England shared with Russia the rare

distinction of having a battalion of female motorcyclists .

The military version was very similar to the civilian 16H of 1937. It lacked the chrome plate and pretty paint job, but bad gained a strong baggage carrier and headlamp blackout mask.