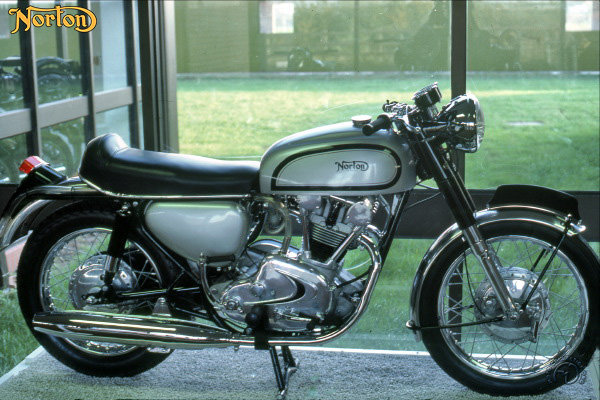 It's impossible to say what direction the British motorcycle industry would have taken if fate had allowed it to develop further. All the factories had intriguing projects on their drawing boards but - due to lack of money and confidence in the future - that's where

most of them staved!

In 1964 Norton was considering replacing its overhead valve twins, which were beginning to show their age. The Plumstead factory - also part of the Associated Motor Cycles group - was given the job of developing a new twin. Developed first as a 750, then as an .800cc under the code name "P10," this prototype was intended for minimum maintenance. It had a unit-construction engine and twin overhead camshafts.

A single chain running inside a triangle of narrow tubes lined with anti-friction material drove both overhead camshafts before returning to the crankcase by a tortuous route in which it also drove the magdyno unit. Two further chains formed the primary and secondary drives. Despite long trials, the P10 failed; excessive vibration forced the use of flexible engine mounts. When Norton regained its independence, it decided to cut its losses and, lacking other means, initiated a design study based on the old Atlas engine. This became the famed Commando, which used the excellent Isolastic mounting of the engine/ gearbox unit to eliminate the vibration problem.

Twin overhead camshafts, unit construction ofengine and gearbox, and five speeds - the P10 promised much but was found wanting.