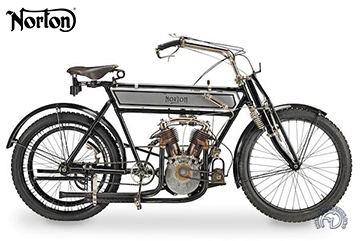 Victor of the first TT with a french Peugeot engine!

Convinced that European races that encouraged huge engines in scanty frames were of little value to the development of touring motor cycles, Britain's Auto Cycle Union planned a contest. Since racing on the public highway was banned in Britain, the ACU persuaded the House of Keys Â– the government of the Isle of Man- to close 16 miles of their roads for the race.

The first Tourist Trophy race, in June 1907, was open to single- and twin-cylinder machines. The main restriction was on fuel consumption- singles had to cover 75 miles to the gallon, twins 62.5. Though speeds were modest, less than half of the 25 entrants finished the race. Because of the amount of pedaling involved on the hills, riders were given a ten minute break at the halfway stage! Charlie Collier won on a single-cylinder Matchless at an average of 38.2 mph, while the twin-cylinder class went to Rem Fowler's

The Norton was powered by a French-built 726cc Peugeot-FrĂ¨res V-twin. With a similar 1272cc engine, Peugeot works rider Giosué Giuppone had set a world flying kilometer record of 87.4 mph along the sea front at the popular British resort of Blackpool. The Peugeot engine weighed under 60 lb and was famed for its reliability. It even powered Brazilian aeronaut Alberto Santos-Dumont's 1906 airship "Santos-Dumont No.14," driving a 5 foot, 7 inch airscrew at a heady 2000 rpm.

H. Rembrandt "Rem" Fowler won the twincylinder class of the first Tourist Trophy in 1907 with this Peugeot-engined Norton.