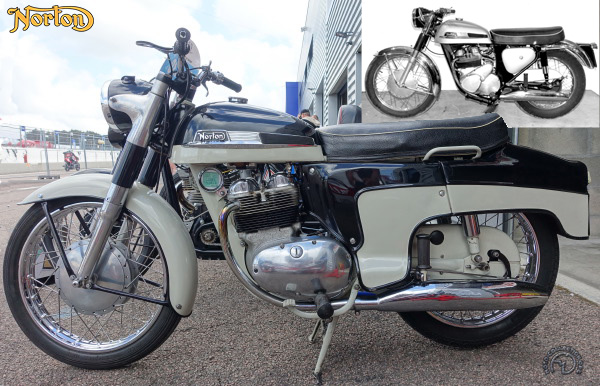 A new generation of Norton twins appeared in 1958 with the 250 jubilee designed by Bert Hopwood. At that time all British 250s were singles. This original two-cylinder had

The hallmarks of success. It featured novel characteristics, like the oversquare bore and stroke (60x44mm) and a unit construction engine built on compact lines.

Unfortunately, the little Jubilee's 16 hp had a hard job stirring its 342 lb into action, and top speed was only 70 mph. The fault was corrected in 1960, with the launch of the Navigator, uprated to 350cc by a total reworking of the engine. Norton's error was

to retain identical wrap-around styling, right down to the front mudguard, so that the new 350 shared the poor image of its predecessor. Undeterred, Norton went back to work and unveiled the Electra at the start of 1963.

This time, the new bike seemed to have all the right ingredients for success. The bore was increased to create a highly oversquare 400cc. Abandoning the clumsy rear fairing of the Jubilee and Navigator De Luxe, the Electra took the classic route, adopting esthetics and a silver color scheme, which recalled the marque's 650 SS. Finally, in an

attempt to match Honda in the US market, the Electra gained 12 volt electrics and an

electric start. The Electra might have been a success. but it was too late. In the hard- fought 400cc category, the Electra proved too fragile to be a real challenge to the more attractive and sophisticated Japanese bikes.

Modern in concept and classic in appearance, the Electra came on tbe scene too late, and went outof production during 1965.