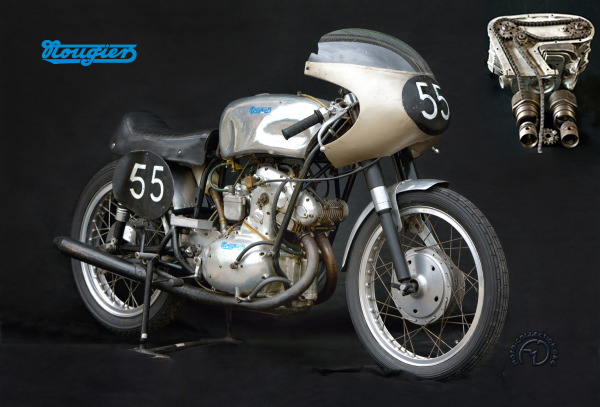 The work of a real-life wizard

Whoever would believe that some of the finest racing motorcycles ever built in France were constructed by a man alone, who was always strapped for cash and whose equipment was totally out of date? Nevertheless, that was the truth about Jean Nougier, "the wizard of Saint-Andiol," among whose finest creations is the 250 Nougier twin-cylinder of 1954.

In 1953, aided by a rider and metal-founder from Grenoble named Collignon and also by the Aubert & Duval metallurgical company, the Italian Dell'Orto carburetor company and an ignition manufacturer Morel, Jean Nougier undertook the construction from scratch of a 350cc four, which was quickly supplanted by a 500 of the same design.

A year later, with the benefit of the experience he had acquired from this project, Nougier set about - single-handedly and without any outside financial help - building his third 250cc racer (the first two dated from 1936 and 1940). This lime it was a twin, effectively half the 500cc four set on the crankcase of a 250 Terrot OSSD touring bike. Nougier shoehorned five speeds into the OSSD gearbox, made his own crankshaft and cylincler head with chain-driven twin overhead-camshafts, replaced magneto with coil ignition, built a frame, modified a Terrot front fork and achieved a speed of 106 mph

- the hillclimbs at Limonest and Goldbach - with "Mickey" Schaad as rider.