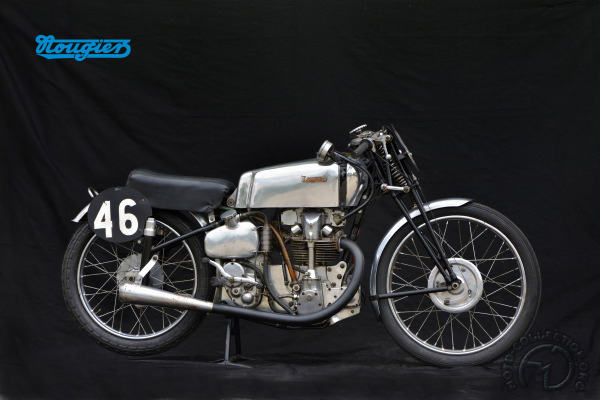 Built by hand to beat the best

Jean Nougier was a brilliant craftsmanmechanic who - from 1937 to his last French motorcycling championship in 1972 either starting with proprietary components or working from the raw metal, hand-built the racing motorcycles that were sadly lacking from the output of the French manufacturers. Designed in 1939 and 1940, the Tournevis ("Screwdriver") was highly successful. Recalled Nougier: "Ridden by my brother Henri or by de Shaad, it won at least 40 races, including the 1946 Avignon Grand Prix. The following year, it finished second at Avignon behind the famous works Guzzi 250 ridden by Fergus Anderson."

All His Own Work

Entirely hand-built, the engine was a superb double overhead camshaft unit topped by impressive hairpin valve springs. This type of spring long remained popular on racing engines since - at a time when the steels of the period often broke - it was easily replaceable without dismantling the engine, unlike a conventional coil spring. Maximum Power at 10000rpm

The Tournevis took its name from the method of driving the overhead camshaft by a vertical shaft with a blade and slot coupling. "At first," said Nougier, "I had this long-stroke engine running at 9000rpm; by the end of its racing career it was touching 10500rpm." The crankshaft ran in three bearings and the separate gearbox was a modified Terrot unit. As for the rear suspension - a rarity at the time - it was also "home-brewed", with a forward-mounted brake to avoid kick-back at the pedal.