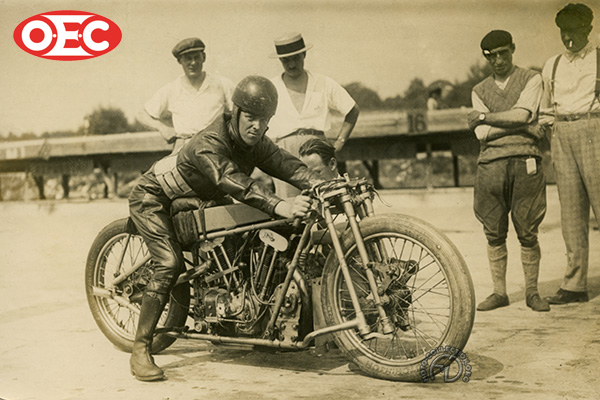 The war of records between Great Britain and Germany was at its height in 1930, and the most keenly-contested record of all was the two-way flying kilometer.

]oe Wright defended the British colors with his OEC-Temple-Jap against Ernst Henne's 750 BMW. Both machines were supercharged.

Wright launched the battle in France, averaging 134.5 mph at Arpajon Â– Henne responded by recording 137.7 mph at Ingolstadt. Wright then took his OEC to Ireland and was timed at 150.7 mph. It was the first time any bike had exceeded the "ton and a half," and the record stood for two years. Claude Temple, who prepared Wright's record-breaker, was a skilled rider with many records on OEC products. Temple had been the first to cover 100 miles in an hour, at Montlhéry in 1925, and first past 120 mph, at Arpajon in 1926. Temple had then obtained backing from OEC and J.A. Prestwich, makers of JAP engines, to build two machines for Wright. The 996cc JAP engines had reinforced crankcases and chain-driven Powerplus superchargers. Since OEC was backing the operation, Wright's top bike had an OEC frame, with its odd duplex steering. But the drive key sheared on his first run, and he actually took the record on his reserve machine, which had a Zenith frame with girder forks. OEC insisted on displaying Wright's top machine on their stand at the London Show as the successful record-breaker Â– a deception that was quickly unmasked.

Joe Wright on his OEC-Temple-JAP on the banked oval track at Montlhéry. The sketch (inset) shows the full fairing intended for his machine.


The record was filmed by PATHE Grande-Bretagne : http://www.britishpathe.com/video/150-miles-an-hour-on-a-motorcycle