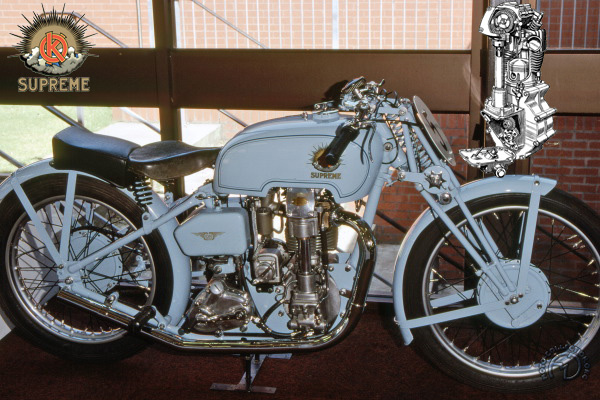 The history of OK-Supreme goes as far back as 1899, when the company Humphries & Dawes Ltd Â– which had been making bicycles since 1882 Â– decided to make motorcycles. As did most manufacturers in those days, OK began by using De Dion, Minerva, Green and Precision engines; their machines were initially sold under the name "OK," the "Supreme" suffix was added in 1926.

In 1919, OK built its first motorcycle with an own-make engine, a 350cc flat-twin along the same lines as the Douglas. It was costly and was quickly abandoned. During the 1920s, OK bikes used Blackburne and Bradshaw engines. Among the well-known riders who raced for OK was Wal Handley (who won the 1922 Ulster Grand Prix 250), Alec Bennett and Frank Longman, who won the 1928 Junior TT on an OK-JAP.

Modem without Being Revolutionary

The first overhead-camshaft OK-Supreme raced in the 1930 Junior TT, but an overcomplicated camshaft drive proved its downfall. In 1934, the overhead-camshaft engine was redesigned by George Jones and Ray Mason and fitted in the Silver Cloud 250 and 350 shown at Olympia in London. The camshaft was driven by shaft in the conventional fashion, and rockers actuated valves with hairpin springs. The cylinder head was cast in bronze, which gave superior heat dispersion to cast-iron, and there was also a sleeved-aluminum cylinder in 1937. The OK-Supreme had no outstanding racing successes, though it was very popular with privateers. Production ended in 1939.

The OK-Supreme was used by Marcel Perrin to win France 's first postwar race, the Bois de Boulogne in September 1945.