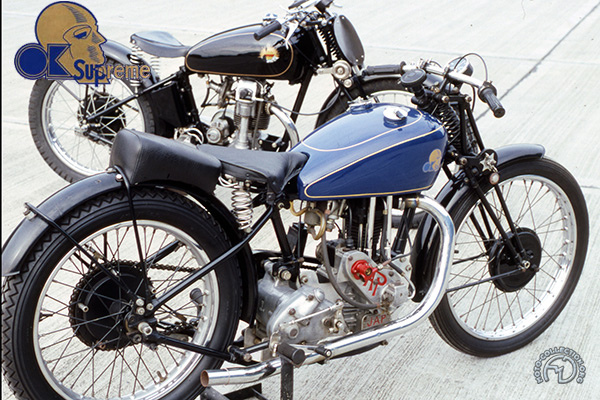 In Great Britain, during the years before and after WWII, grass-track racing was one of the most popular forms of motorcycle sports. It was run over circuits of varying length that Â– unlike Speedway Â– had both right- and left-hand bends and could be traced out in any field where permission could be obtained, often incorporating steep ascents and descents. Brands Hatch, a Grand Prix circuit, started as a grass track in the 1930s.

Many British makers built special grass-track machines. This OK-Supreme has a "five-stud" JAP 500 Speedway engine, so-called from the five studs retaining the cylinder head instead of the usual four. Since the high-compression Speedway units, running on methanol, had the tiresome habit of shedding their heads and grass-track circuits were longer than those used for Speedway, a gearbox was a useful addition.

Ernie Humphries, who was a partner in the OK company, resigned in 1926 and moved into a new factory to build a new motorcycle -the "OK-Supreme." Alec Bennett designed a squish-type head for the works JAP-engined racers for the 1928 Lightweight TT, won by Frank Longman's OK-Supreme after Bennett retired. Though OK-Supreme built its own engines after 1930, it continued to use JAP power units and specialized in grass-track racers. In 1946, Humphries' son John built some promising 346cc OK-Supreme-JAP grass-track bikes. But John was killed in a fall from a hotel window, and his 90-year-old father could not carry on production.