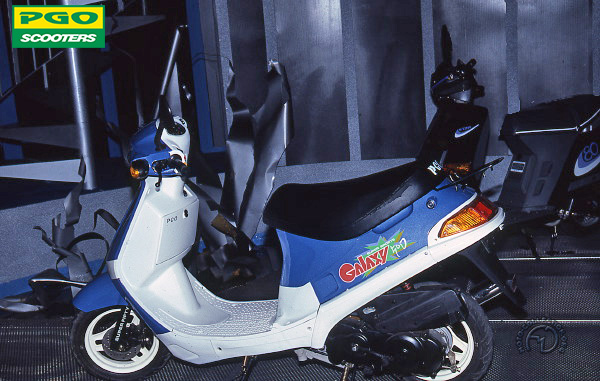 First Taiwanese Scooter Made for Europe

A new marque of scooter, PGO, has been progressively establishing itself in European markets since 1988, gradually increasing its sales in its sector. Nothing interesting about that? The big news is that it is an offshoot of one of Taiwan's leading industrial companies and that this low-key operation could well be the sign of bigger things to come.

From Peugeot Cars to PGO Scooters

PGO, the first Taiwanese motorcycle manufacturer to move into Europe, built 45,000 scooters in 1991, of which 46 percent went for export. It is part of the Yeu Tyan Machinery (YTM) group, founded in 1964, whose activities encompass heavy industly,

developing its own range. Typically, in France, PGO offers in 1992 a four-model range from 50 to 80cc.

Like every other marque, PGO started by exporting its products just as they were, now the company has started developing them according to specific requests from individual markets. One result is the Galaxy, the new flagship 50cc model launched in June 1.992, whose wheelbase, for instance, has been lengthened by over 3 inches compared with the Comet to give greater comfort when the scooter is being ridden two-up .

Competitively priced, the new top of the PGO range, the 50cc Galaxy, has been tailored to meet the specific demands of the French market.