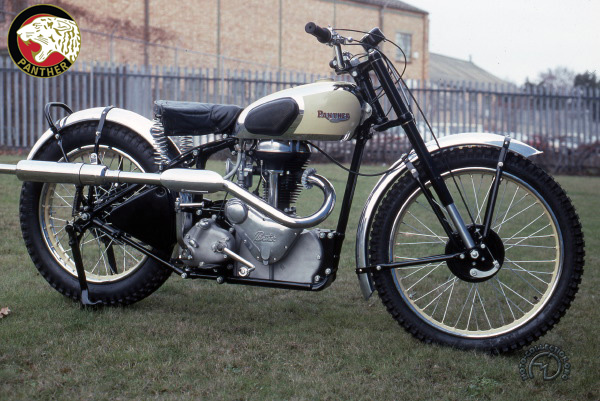 Between 1901 and 1966, Panther Â– founded by Joah Phelon of Cleckheaton, Yorkshire, who went into partnership with Richard Moore in 1903 Â– was best known for its inclined big singles whose cylinder doubled as the front down tube of the frame. Phelon & Moore, known as "P&M," resumed production after World War II with the popular prewar 600cc Model 100 "sloper" and new 250 and 350cc vertical singles with the oil carried in a forward extension of the crankcase.

In 1947 Panther adopted Dowty oleo-pneumatic front forks, made by a company famous for aircraft landing gear. The excellent results achieved by this adjustable suspension compared with other systems of the day, and the predilection of the firm's management for competing in trials gave birth to one of the finest little trials bikes of its day, the Stroud. It went into production in 1949 in 250 and 350cc form.

The Stroud soon gained an enviable reputation in trials, with riders such as Maurice Laidlaw and Bill Jackson; it was also very successful in grass-track racing in the hands of Bob Dunn. The Stroud was only sold in small numbers in its homeland; its most appreciative clients came from the Scandinavian countries, so much so that the Swedish Svalan firm built the road-going derivatives of the Stroud, the 65 and 75, under license.