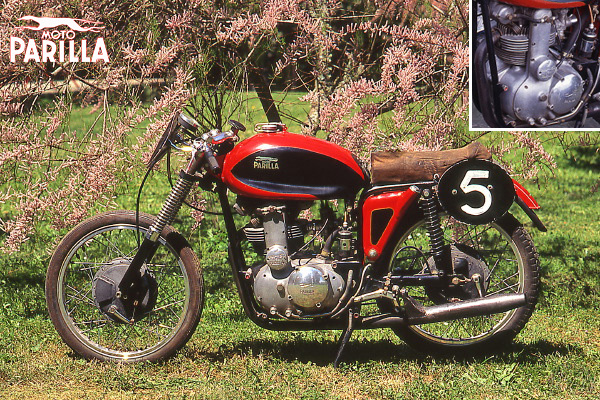 Last of the works four-strokes

The first Parilla, the overhead-cam 250 of 1947, was one of the great Italian sports bikes after WWII. Right up to its closing in 1967, the little marque founded by Giovanni Parrilla (with two "r"s) leaned heavily towards sports and racing motorcycles.

During 1947, Parilla developed a "Bialbero" (twin-cam) version of its 250, which made its debut the following year, with an impressive catalogue hp of 21 at 8500 rpm. These Parillas, with shaft-driven twin overhead-camshafts, proved extremely successful but had reached their peak by the start of the 1950s. Parilla, no longer able to challenge the big factory teams, then concentrated on sports and client-competition machines.

In 1952, Parilla launched its 175 Fox, with a high-set chain-driven camshaft operating the overhead-valves through short pushrods. The same year, a prototype twin-cam 125 ran in the Italian GP without success. After a long development period, the definitive version appeared at the 1955 Milan Show. A 175 was being readied for the Tour of Italy. Like the original Parilla, it had been designed by Giuseppe Salmaggi (also responsible for the Gilera Saturno and various Rumis). It would be the last works Parilla four-stroke racer. The factory wanted success in Formula Two racing, vital to Italian sales. The formula compelled bikes to use the same crankcases as production models. Beside its twin camshafts, the Bialbero had exposed hairpin valve springs, five-speed (four for production machines) and dry-sump lubrication. But it did not achieve the expected performance and only two or three were built.