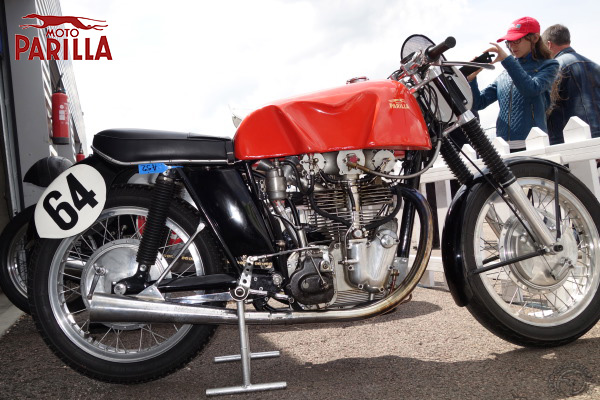 Its first 250cc racer, a twin-cam single, appeared in 1946, while a 350 made its racing debut at the 1950 Marseille Grand Prix in a version with a girder front fork. Ridden by Pagani, it reached a speed of 110 mph.

Among the 250's honors was a win in the 1950 Milan-Taranto ridden by Piero Cavaciuti, plus placing in the Swiss Grands Prix of 1951 and 1952. Oddly enough, it was in Germany that the Parilla 350 enjoyed the greatest success because it was totally competitive with the DKW and AJS racers, thanks to the rider/engineer/tuner Roland Schnell (whose name means "fast" in German). Schnell and his compatriot Hermann Gablenz notched up an astounding record of success in 1950 and 1951 riding highly modified 350 Parillas. Schnell had, among other things, equipped his 350 with a six-speed gearbox of his own design. Like the Manx Norton, the twin overhead-camshafts of the Parilla was driven by shaft-and-bevel gearing to a train of pinions in the cylinder head. The valves had massive hairpin springs operating in the open air. Cylinder and head were in light-alloy while the crankcase was a magnesium casting. It all added up to a light-weight 254 lb for the 250 and 256 lb for the 350.