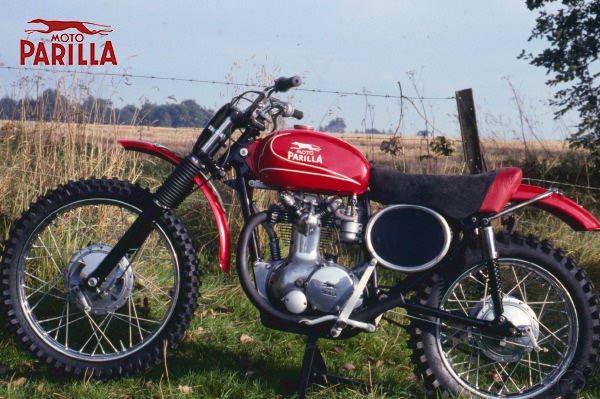 Scrambling for the American market

Parilla's famous 175cc high-cam single-cylinder engine powered many a production-racing Grand Sport MSDS model to the checkered flag. The beautiful and efficient powerplant was also used in an off-road scrambler version of the Grand Sport that was aimed at the American marketplace via Parilla's US importer, Ernest and Larry Wise's Cosmopolitan Motors of Philadelphia.

Parilla called its scrambler the Tipo America Cross, which defined its planned role for the off-road motorcycle. For the US market, Cosmopolitan renamed the model the 175cc Wildcat Scrambler. Tagged with an aggressive name, Cosmo's race team set off to challenge the other lightweight imports on the hillclimb, dirt track and scrambles courses of America.

By 1960, the 175cc engine was increased at the instigation of Cosmopolitan to 250cc with a larger bore and stroke. Along with the larger-capacity engine, the new Wildcat used a stronger triangulated frame. At 250cc the Wildcat reached its pinnacle, ruling American lightweight off-road racing for several years in the early 1960s. Parilla Wildcats took home trophies piloted by the likes of the great Dick Mann, who won three first places in short-track racing at Daytona in 1964 mounted on a Cosmo Wildcat.

Parilla 's 250cc Wildcat was built specifically for the US market and is rarely found anywhere else in the world Â– including the Italian home market.