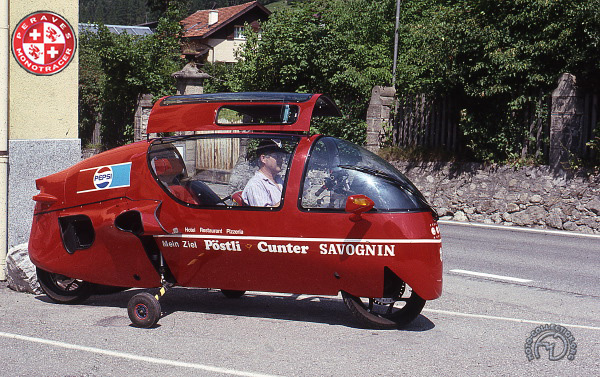 Is it a car? Is it a motorcycle? Certainly the British authorities expressed no doubts when this Swiss-built tandem-seated two-wheeler visited England in 1982, insisting that its pilot wear a crash helmet, obligatory on motorcycles.

This highly-original machine uses a 987cc BMW four-cylinder engine and transmission, though a Swiss gearbox incorporating reverse gear is available as an option. Like the Monotrace of the Twenties, the Ecomobile has a car-like body, streamlined like an airplane fuselage, with an all-enveloping canopy. Its construction comes from the aerospace industry.

Production is limit~d, but one of the first 15 owners avows: "My Ecomobile is superior to a conventional motorcycle, even on narrow mountain roads. Its length does not pose any problems when maneuvering in confined places, for it has a 26-foot turning circle, it

can safely be leaned over to 52 degrees Â– more than a motorcycle Â– and its fuel consumption is noticeably less." Snug in his air-conditioned cockpit (stereo and telephone are options), the rider controls the Ecomobile through a hand gearshift; twin pedals operate clutch and coupled brakes (ABS is another option). Beneath the handlebars Â– the front fork is also from the BMW Â– a button controls the retractable steady wheels which provide extra safety in icy conditions.

Avant-garde? The Economobile recently made an appearance in Wim Wender's filtn Until the End of the World, as the police cycle of the near future.