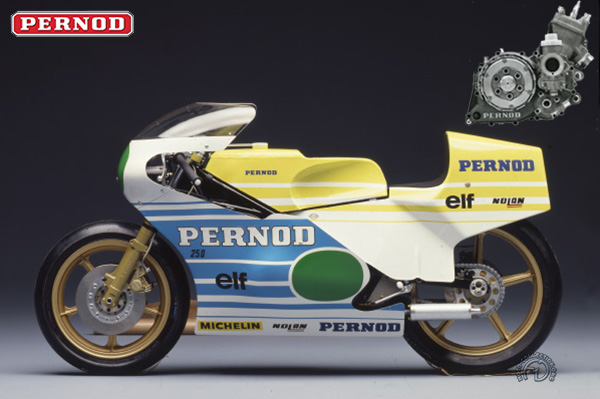 Having become a major sponsor of motorcycle racing, the Pernod aperitif company decided at the beginning of 1981 to finance a 100 percent "made in France" racing bike.

It was an ambitious project. Pernod wanted their 250cc racer to be operational during the 1981 season with the aim of competing for the championship the following year. They appointed engineer Jean Bidalot Â– designer of the brilliant Motobécane 125 Â– as chief designer. His creation was similar to his Motobécane: a water-cooled two stroke twin with rotary intake valves. But though it had been designed in France, the Pernod relied heavily on subcontractors from other European countries: German Krober ignition, Spanish Beymag rims, Italian Marzocchi suspension and Zanzani brakes.

This 65 hp racer looked highly competitive, but its first outings during 1981 were shortened by repeated seizures. By 1982, the Pernod was running reliably. Thierry Espie demonstrated how far the French team had come when he finished third in the final Grand Prix of the season on Germany's ultra-fast Hockenheim circuit. But it wasn't until the following season that the Pernod scored its first victory. Jacques Bolle rode it to first place in the British Grand Prix after a heroic struggle with his fellow countrymen, Thierry Espie and Christian Sarron, but sadly this proved to be a one-time happening.

Maximum Speed: 143-152 mph according to circuit

After a disappointing start to its career, the 250 Pernod won its first Â– but only Â– Grand Prix in 1983.