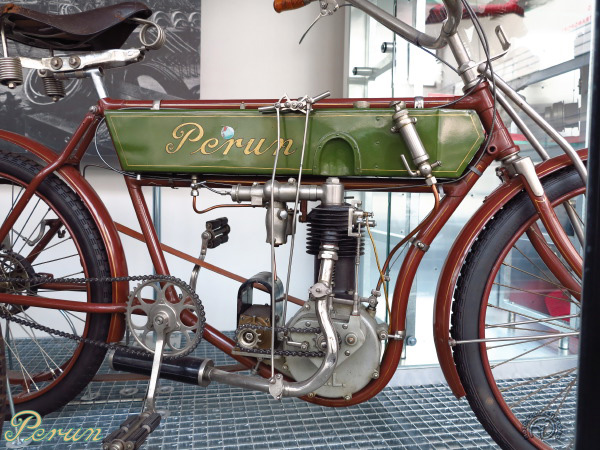 In the early 1900s, Bohemia was the industrial heartland of the Austro-Hungarian Empire, and Ā– along with Laurin-Klement, Walter and Torpedo Ā– Perun was one of the very first makes of motorcycle to appear in this ancient crownland, which became Czechoslovakia in 1918.

The Perun motorcycle was built by Zdarsky, Podoli & Svijan, a firm based at Tumov, in the Sudetenland. The company was founded by F. and J. Zdarsky. Production began in 1904, with 3 hp singles sold in very small numbers, followed by 4.5 hp V-twins (the engines were probably supplied by Fafnir). The twins were exhibited at the Prague and Vienna Shows starting in 1905, while the singles participated in competition with some success.

Although the history of the marque is obscure Ā– all the factory records were destroyed in the turbulence of this East European region Ā– it is known that the majority of the motorcycles built by Zdarsky were marketed under the name "Vulkan." After a reorganization, the firm was taken over by Ruzicka, who had been production manager under Zdarsky. However, WWI proved fatal to the business, and the construction of bikes ceased in 1918. The firm then restricted its activities to the manufacture of clip-on 1.4 hp engines and cycle components, before vanishing altogether in 1924.

Though this big bike may appear crude, it nevertheless shows the high technical level achieved by all the Austro-Hungarian marques at the turn of the century.