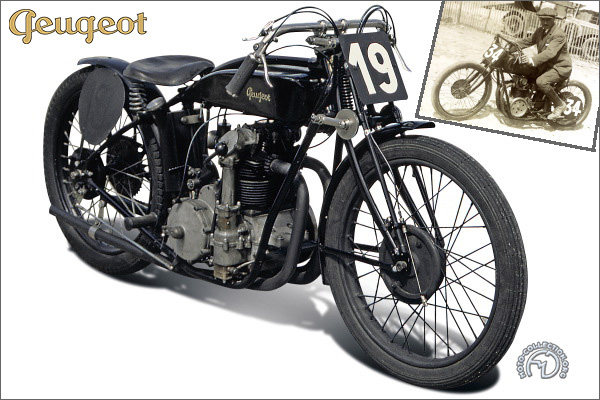 Still modern after all these years

well in international competitions. One notable exception was the string of victories won by the revolutionary Peugeots Grand Prix twin-cylinders of 1914 to 1927.

Just before the Great War Peugeot presented its first vertical twin, a fabulous 500cc with shaft-driven twin overhead camshafts and four valves per cylinder. In 1914, with direct drive only, this two-wheeled revolution set a new flying kilometer record of 75.8 mph with the well-known French racer Pean in the saddle.

In 1920, the Rumanian engineer Antonescu developed the basic design along modern lines with a horizontally-split crankcase and a unit-construction three speed gearbox with a dry-plate clutch and chain transmission. This highly-successful 500 was replaced in 1923 by a new version with a single overhead camshaft and two valves per cylinder, developing 27 hp. With this machine, Pean covered the flying kilometer at 97.7 mph in 1923, then broke the 100mph barrier with a speed of 102.8 mph in 1924. Sadly, Peugeot ceased participating in international races in 1927, after establishing the finest run of victories ever achieved by a French marque, including the Grand Prix des Nations, the

Swiss GP, the Motorcycle Club of France GP and the Spanish GP. In all, twenty-one victories out of twenty-three races.

Restored by jean Nougier around a 1927 engine which has miraculously survived, the Grand Prix Peugeot is still capable of over 75 mph and is disconcertingly easy to ride.

Much more info about all Peugeot Grand Prix motorcycles in the book Â«Unusual MotorcyclesÂ» by FranĂ§ois-Marie Dumas - Haynes edition.