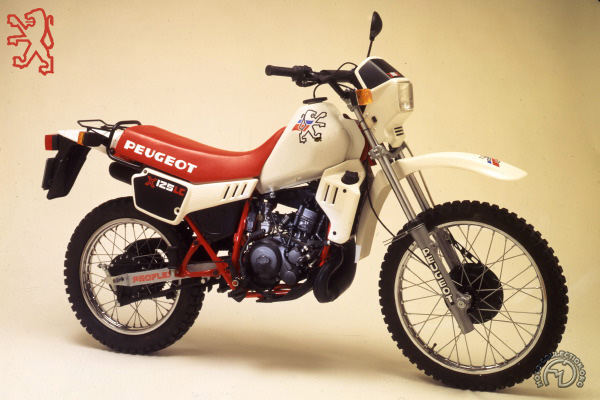 The last of the line

At the start of the 1980s the future of the motorcycle seemed set - so much so that even a firm as sensitive to a change of climate as Peugeot was tempted to stick its corporate head over the parapet. In 1980 that leading manufacturer began making inroads with an 80cc trail bike derived from its old 50cc model, following with a 125 with a Gilera engine. Peugeot also entered enduro racing with an 80 using a Portal frame, created a Honda-based scooter in 1983, then dared to launch a modern 125 trail bike.

Like its predecessor, this 125 resulted from an association with Gilera, who had put this highly developed engine - automatic inlet valves, balancing shaft - on the market at the end of 1983. The overall conception was designed by the young and talented French designer Vincent Soulignac. Design, final assembly and a few components were French, and the end result was both competitive and well-presented.

Not Up to Expectations

never approached the anticipated sales figure on the market. Production was halted, dissuading Peugeot from continuing motorcycle production. Nowadays, only the

French Army still has used this machine, in a 200cc version.

The 125 L/C, a joint development by Peugeot and Gilera, was effectively Peugeot Last seriesproduction motorcycle.