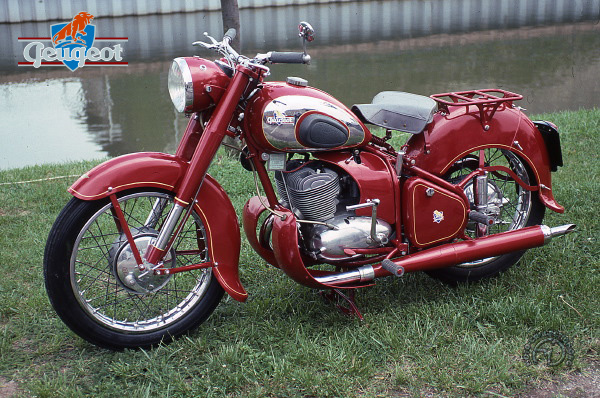 The last of the lion

Launched in 1954, the 250 Peugeot TC4 was the biggest Peugeot bike of the postwar period, as well as the marque's first twin cylinder two-stroke. At last the marque, whose trademark is a lion, was back in the larger capacities; Peugeot confidently expected a lion's share of the major international markets.

Two into One Does Go

Available in luxury (E) and normal (A) versions, the 256 TC4 was intelligently created at minimal cost by Peugeot, offering extremely simple maintenance to the user. Its unit-construction two-stroke engine was a sort of Tinker Toy composed of two linked single-cylinder units with coupled crankshafts. One half of the crankcase housed the removable chain-driven gearbox. Less novel was the frame, taken from the 175 single, with a front telescopic fork, and - unfortunately- plunger rear suspension. This relic of the past, combined with chubby styling, quickly made the 256 TC4 obsolete.

Good- But Not Far Enough

In one final bound, Peugeot brought out alongside this model a 350cc version with a swing arm rear suspension in 1958, only to drop both in 1959. The 256 wasn't really so bad; as light and manageable as a 125, it was particularly handy around town and was pretty good on the highway, too, with average roadholcling and excellent brakes.

The TC4 E, luxury version of the 256, was distinguised by a front fork with hydraulic damping, an oil-hatb chain and long foot-boards.