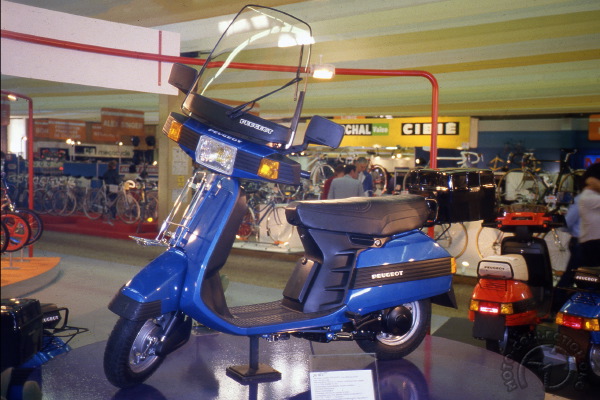 A new class of scooter for Europe

At the beginning of the 1980s, Peugeot managed to persuade the French government to introduce a major reform of the driving license, enabling those who had passed the automobile test to drive 80cc motorcycles with automatic transmissions. This opened the way to the development of a new type of urban vehicle.

Curiously, Peugeot did not make a suitable power unit, so it had to approach Honda. Peugeot supplied engines in considerable numbers for the cyclemotors made in Belgium by Honda. The Japanese constructor provided engines and transmissions from its Lead scooter for Peugeot to install in a frame and bodyshell of its own manufacture.

Components such as the electrics were also imported from Japan.

The venture was a total success: the SC 80 and its little sister, the SC 50, precisely suited the needs of the French market and were also widely sold in other European markets. The SC 80 became far and away France's bestselling motorcycle (more than 8500 units annually) and was exported in large numbers, particularly to Spain, where it did not suffer from the quotas then imposed on the Japanese. Peugeot, which had been badly affected by the slump in cyclemotor sales, rode out the 1980s as market leader with an enlarged range of 50-125cc scooters, still Honda-based, but gradually reducing its dependence on the Japanese giant for components and equipment.

Despite its japanese heart, the SC80 had a very French personality and headed Peugeot's drive for supremacy in the scooter market.