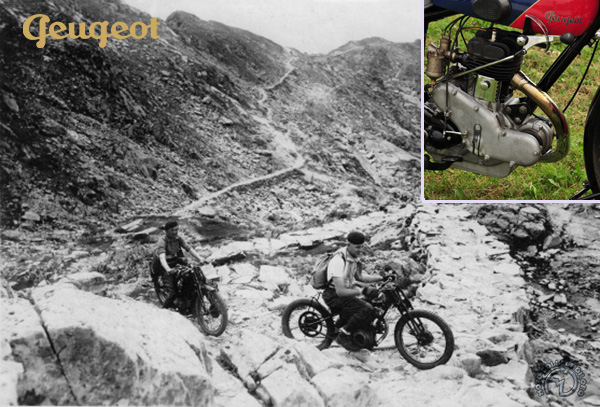 Having devoted its activities to the production of little two-stroke machines, Peugeot moved to larger engine sizes in 1926, when it launched its P104, a side-valve 350. Jt was the first to use me unit-construction engine that remained a characteristic of Peugeot four-strokes until WWII.

This series of unit-construction engines initially increased in capacity with side-valve or overhead-valve units of 350 and 500cc. Then, in 1929, Peugeot at last turned to lightweights and launched its P 109 of 175cc and P 110 of 215cc - popular, economic little machines that demonstrated remarkable technical skill.

Faced with all the contending two-stroke products, it was a calculated risk to develop a little unit-constructed four-stroke at a competitive price. Peugeot succeeded brilliantly. The P109 and P110 were virtually identical - onlv me diameter of their pistons (54 versus 60mm) told them apart. Their finish was austere: the only choice of color was black, and there was a minimum of polished metal. The engine and frame, however, revealed many ingenious tricks of manufacture adopted to keep the price low, without detracting from the quality or the performance. The side-valve engine was built up from remarkably few components, while the frame, which could be dismantled into two parts, had a pressed-steel girder front fork. The P 110 remained in production until 1934, when it was replaced by a genuine 250, the P 210.

The 1933 Peugeot equipped with electric lights was supplied with current from a small belt-driven dynamo clipped to the front down tube.