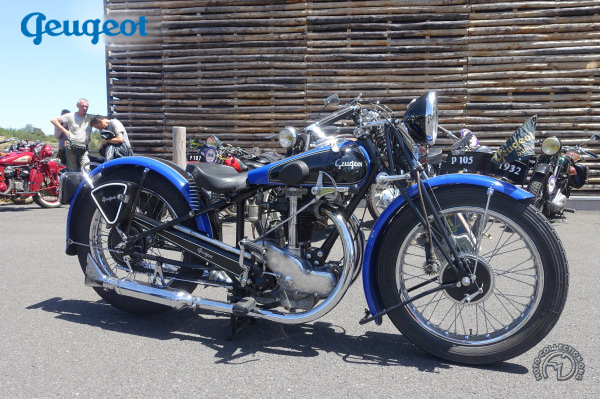 The lion does not sleep tonight

Peugeot's Lion represents France's determination in the face of opposition. It also represents Peugeot's response to the many fine designs produced by its rivals in the late twenties. Outstanding among these was the ultra-modern P 105 350cc single that first appeared at the Paris Salon in 1927, the same year that "Lone Eagle" Lindbergh made the first solo crossing of the Atlantic.

In the pioneering spirit of the age, the new Peugeot fused its engine and three-speed gearbox into a single unit, while most of its competitors still retained separate construction of these units. The compact ohv engine looked like an overhead-cam unit, with its pushrods concealed inside a vertical chrome tube and an aluminum casing concealing rockers and valve springs (though the valve stems were exposed).

Elegant, durable, and extremely reliable, the P 105 and its "economy" L-head derivative, the P 107, were produced until 1935 with numerous improvements, both technical and aesthetic. But its performance in terms of acceleration and overall speed were disappointing compared with the opposition and it was supplanted by a new, more potent range - the 350cc P 115 and the 500cc P 515 - which made their debuts in 1933.

Introduced in 1932, the P 105 DT was one of the final developments of the series, with a twin-port head, abundant chrome and interchangeable wheels.