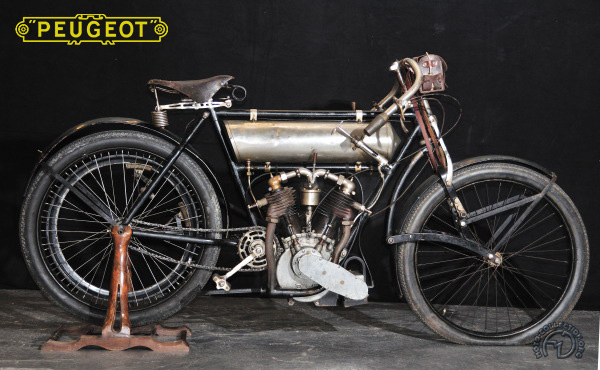 A giant from the dawn of motorcycling

Peugeot, from LA to London

The 1000cc engine began its life as a racing machine and ended its career on sale as a sporty bike for riders in search of thrills. A "big-twin" Peugeot raced in 1907 at the Agricultural Park in Los Angeles, ridden by Walter "Skinny" Collins. The engine was also

used by other makes like the British-built NLG (North London Garages), whose first-ever

bike won, at Easter 1908, the first-ever full-scale motorcycle race on the Brooklands

Even though France in 1907 was a country that had taken the motorcycle to its heart, monsters like the Peugeot 1000 were very much the exception, and utility machines were in the majority in that period of financial crisis in Europe. While a gallon of gasoline cost the equivalent of 35¬¢, a laborer in Paris earned just 14¬¢ an hour, about the price of a bottle of red table wine. So a bike like the Peugeot-which cost the equivalent of $185 with coil ignition, plus $20 for a Simms-Bosch magneto driven by chain (or $25 for a geardriven magneto) - was beyond the reach of most people. By comparison, an imported four-cylinder Model N Ford sold in Paris for the equivalent of $700, and the cheapest single-cylinder French cars cost $450.

Miraculously preserved in its original condition,even today this rare and beautiful 1000cc Peugeot racer is an impressive performer.