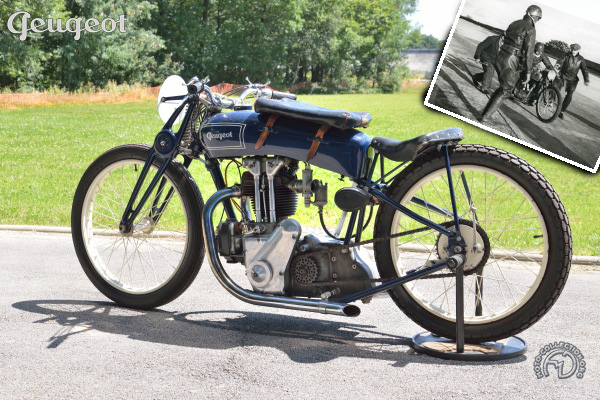 Peugeot hadn't built any bikes over 500cc since 1920. Then, days before the opening of the 1933 Paris Salon, EugĂŞne Peugeot personally revealed the new 500cc overhead valve P515 to the press. A year later, this machine set nine new world speed records.

For the new range of "high-powered motorcycles" (which included the 515), Peugeot designed a totally new unit construction engine that was far removed from the traditional simplicity of the power units built by the Peugeot motorcycle division's Valentigney factory.

It took a couple of helical pinions of questionable reliability to drive the longitudinal camshaft and the magneto, a pair of gears for the oil pump, a chain to drive the dynamo, a second chain for the kick-starter and a third chain for the primary transmission. The power unit suffered from being oversize and overweight. After many internal modifications, it became so reliable that it was feasible to think of using it to set world speed records to promote this model. In 1934, thePahin brothers, Camille Narcy and Pedro Verchere, were at Montlhery with a lightweight 515 fitted with a special fuel tank, which quickly began to leak. As torrential rain fell, the lights failed. evertheless, the engine kept running, and Peugeot set nine world records, of which the 24 hour (at an average of 73.8 mph) and 3000 kilometers (73 .4 mph) were the most outstanding.

If it hadn 't been for the problems with the special 5.8 gallon tank, the 515 record-breaker could have gone further than 1770 miles in 24 hours.