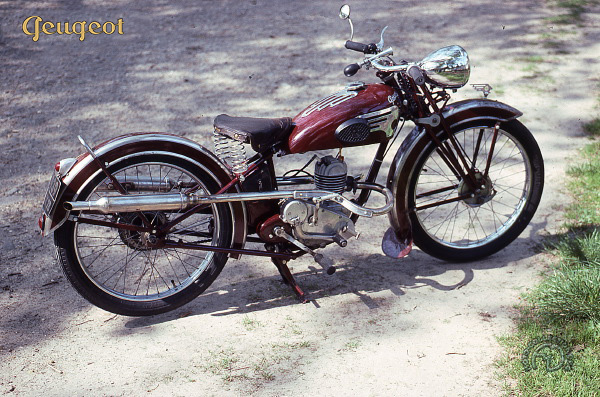 A sport motorcycle in miniature

During the 1930s, the "real" French motorcycle - with a displacement of 175- 500cc and over - had come to grief. Only the advent of the autocycle, limited by law to under 100cc - offered a lifeline to the struggling industry. Even giants like Peugeot had to follow the trend and consequently produced a well-integrated range of these economical featherweights.

In 1939, the sole year of production of the 53 CS "Special Grand Luxe" autocycle, Peugeot offered the Series 51, with direct-drive or two speed transmission, the Series 52, with two speeds and a "motorcycle-type frame," as well as the Series 53, with a unit-construction three-speed powertrain. There were also open-frame models "for ladies and priests."

In addition to the CS, the Series 53 included the CN, CL and CHL models. These were really motorcycles in miniature, rather than autocycles. The 53 CS, in particular, looked like a scaled-down version of the "very powerful" 500cc Type 515 and was easily distinguishable by twin high-level tailpipes, a rear grab-handle instead of a luggage grid, a cranked selector pedal, and a stylized chrome tank motif in the shape of the Peugeot lion. As for the transmission, the primary chain ran in an oil-bath, a multi-plate clutch was mounted on the end of the crankshaft and the three-speed gears were constantly in mesh. The liberally-chromed 53 CS won first prize in Moto Revue magazine's "Autocycle Day" in April1939.

Enameled kingfisher blue, red or black, the abundantly-chromed Peugeot 53 CS, with its highlevel exhausts, looked like a real sports bike- but it was only a 98cc autocycle.