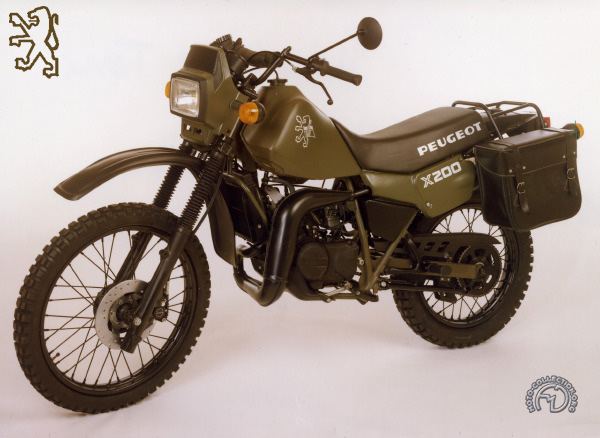 The order that was never given

In 1983, the French Army decided to renew its motorcycle fleet, with one overriding consideration - buy French! The first consequence of this was the partial cancellation of a contract to purchase Honda CB 350s. Additionally, the Peugeot 80cc SX8 AR issued to other ranks in the army was pretty gutless - 6 hp at the rear wheel over a narrow power band that hardly allowed a convoy to travel rapidly.

Four prototypes were submitted by Peugeot, MBK, Ligier and Barigo. After a year of trials, just two French machines, both with strong Italian accents, remained in contention- the Peugeot (closely related to the Gilera) and the Ligier (identical twin of a Cagiva). The choice was surprising, since both were two-strokes, which were unpopular with the Army.

The Peugeot came out on top and ten bikes were distributed to the regiments, and the X200 was the main exhibit on the Peugeot stand at the military exhibition at Satory, near Paris. However, the Army decided against ordering the expected 5000 units, and the project never passed the experimental phase. That was not good enough for Peugeot, which had hoped to launch a civilian version. Even though it was designed for military use, this X200 was closely based on the X125 trail model (which had not achieved the anticipated success). Therefore, Peugeot went in an entirely different direction with the Gilera engine X200, which seems to have been the end of the road for Peugeot motorcycles.

The Peugeot-Gilera failed to attract the expected military orders, and it was finally a genuine Italian machine, the Cagiva four stroke, that was chosen.