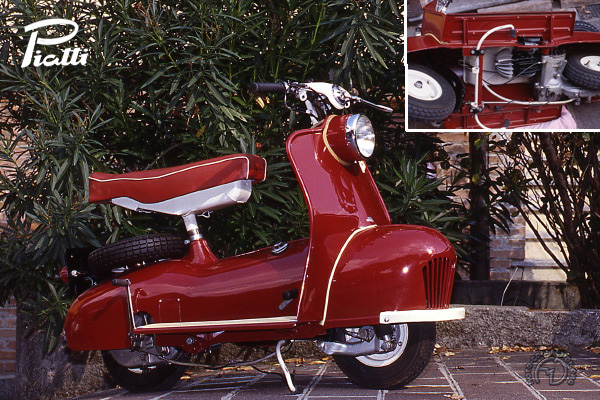 The scooter craze was at its height in the 1950s, but while the scooter was undeniably practical, it had a number of fundamental drawbacks. Its pressed-steel construction required considerable investment in tooling, its rear-engined layout was basically unstable, and the total enclosure of its mechanism called for special attention to be paid to cooling.

A New Kind of Scooter

The Italian engineer Vincent Piatti resolved all these problems in one stroke when he designed his new scooter in 1952. His cunning plan lay in the design of the frame, a simple load-bearing steel half-shell made rigid by a square-tube chassis to create a

tunnel in which air could circulate freely. The sole disadvantage was that there was no flat foot-board.

The horizontal engine was mounted centrally ahead of the rear wheel, perfectly cooled by the airflow through the tubular bodyshell, which had large grills in the front mudguard extension and at the rear. This avoided the need for a power-hungry cooling fan. The powertrain of the Piatti was extremely compact: the engine was fixed, with the lightalloy chaincase acting as the rear suspension arm; the three-speed transmission was mounted in the rear hub. The fuel tank was mounted above the engine. The suspension was well thought out, with adjustable rear damping, and the brakes were coupled.

Built in Britain by Cyc!eMaster the Piatti was sold through the Belgian D'Jeteren company, which had once been a great coach builder for the luxury car trade.