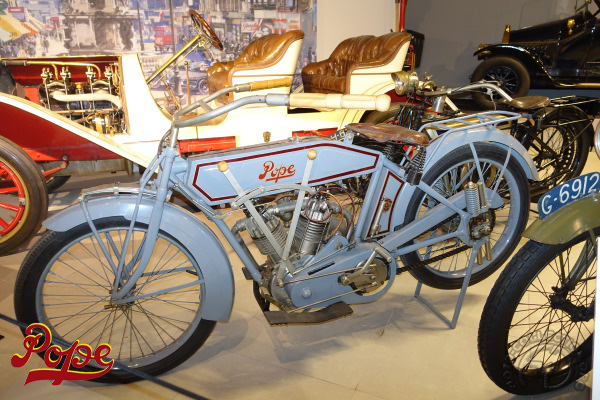 Golden days of the American industry

High-performance US motorcycles enjoyed a golden age in the years before WWI. The Pope was one of the most technically advanced machines on the market. It was the product of the first great American automobile manufacturing combine. Founded in 1877 by Civil War veteran Colonel Albert A. Pope, the Pope Manufacturing Company quickly dominated the national bicycle market.

An automotive division was founded in the 1890s to build both gasoline and electric cars. One of its associate companies held the rights to the Selden "master patent," with which it attempted to dominate the youthful American automobile industry.

The group was complex and over-capitalized, and it collapsed in 1908. Only the automobile plant in Hartford (Conn.) and the bicycle works in Westfield (Mass.), which began making motorcycles in 1911, remained under Pope's control. By 1913, it was offering a range of single and V-twin machines with overhead-valves, a feature then only seen on the works Indian racers. Another advance was the use of rear suspension, still an uncommon feature 20 years later. Popes achieved excellent racing results, but fierce competition from Harley, Indian and Excelsior sidelined them in 1914, due to insufficient development and a lack of funds. Pope died in 1909, and his companies were soon in financial trouble. Automobile production ended in 1914, but the motorcycle factory survived until 1918.

With suspension fore and aft, the Pope was one of the most advanced machines of its day, a product of America's first great automotive empire.