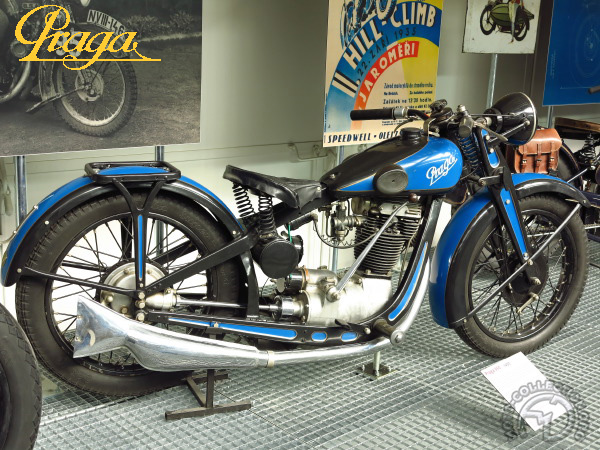 Jaroslav Frantisek Koch (1893-1993) had worked in the automobile industry with Laurin & Klement (later Skoda) - then in aviation for the German Aviatik company before designing motorcycles, starting in 1923 with the 350cc JFK. He created a modern, unit-construction twin-cam 500cc for Breitfeld & Danek of Prague in 1927. In 1929, when the BD factory was acquired by the Praga car company, the 500 continued, now renamed "Praga." For the new owners, in 1930 Koch designed a 350 intended to be less expensive than the 500.

The new 350 had a single overhead-camshaft running longitudinally, driven by a vertical shaft as on his earlier JFK, though the shaft was now in front of, rather than behind, the cylinder. Typical of Koch's designs, the camshaft was driven by worm gearing.

Since the crankshaft was also longitudinal, the 350 had shaft transmission. Koch may have been a gifted engineer, but he was an inept cost accountant. The production of the 350 Praga (which was still over-sophisticated) was halted in 1933, at the same time as the 500. Koch, having left Praga, decided to launch a new 350 under his own name. This time, it had a four-speed gearbox and chain drive, but Koch gave the new machine telescopic forks (a year ahead of BMW!) and plunger rear suspension. With the same bore and stroke as his original JFK (74.5x80mm), this 350 developed 17 hp but was no more successful than the 350 Praga. Koch took the sensible course of joining CZ in 1935 where he. will create the famous Cezeta scooter

In designing this 350, Koch was mindful that it had to cost less than the 500. However, he could not get the price down sufficiently to make production economically viable.