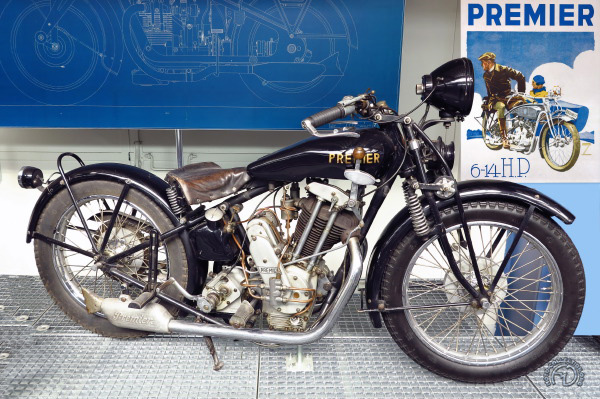 The Premier Cycle Company of Coventry was one of the few "multi-nationals" in the cycle industry: it had factories in Nuremberg (Germany), Eger (Austria) and Japan.

The German factory was set up in 1910. It was run by Englishman Basil Jones, who married into the Rotherham family that controlled Premier. Nuremberg's output consisted of a 350 side-valve single, built using parts from Coventry, pedal cycles and baby carriages. In 1913, financial problems prompted the transfer of production to Eger.

After the breakup of Austria-Hungary in 1918, Eger was located in the new country of Czechoslovakia and was renamed Cheb. Though Coventry Premier had abandoned motorcycle production in 1915 and was taken over by Singer in 1920, the Czech factory continued an independent existence, headed by Geoffrey Rotherham. Production began in 1923, with the 270cc Lilliput two-stroke. It was based on the English-built Triumph Baby, and was joined in 1925 by 350 and 500cc JAP engined singles. In 1927, Premier fitted its own engines and added a side-valve 750 V twin to replace the Czech army's Itars. These machines ensured Premier's leadership of the Czech market, but the success was short-lived. The company's finest model, the 1929 overhead-valve 500 long-stroke "sloper," designed by Otto Lausmann, was its last. Control of Premier passed to a bank and the company went out of business in 1933.

Strongly influenced by the British Triumph Baby, the 270cc Premier was the base model of this Czech line for nearly ten years.